Down in the Town: Lux Steakhouse and Bar 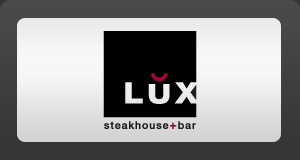 As billboards and advertisements around town are quick to point out, Lux [Steakhouse and Bar] is "A Rare Steakhouse Well Done"! (..that's even punny-er than me! No small feat!) Let's just hope their food is as good (clever) as their puns! Armed with my trusty camera and pen in hand, I went to check out what all the fuss was about!

The prices at Lux do command quite a premium with dishes like the top-of-line "Lap of Luxury" nearing triple digits; but fortunately - on this occasion at least - I managed to snag a deal on Groupon for $50! Huge shout out to Groupon here by the way; they have great deals all the time (!), which definitely helped stomach the cost! (Did you catch that: "stomach" the cost?) I'm funny, I swear. Well, I might not be able to match the quality of Lux's puns but I hope to go head to head with their food! 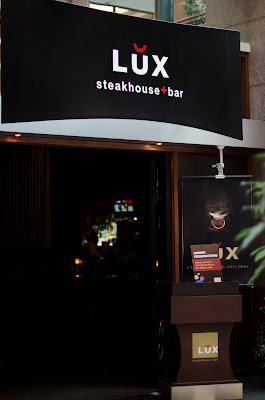 Now I was pretty hungry that night and with a pair of companions, I was fairly confident we could polish off a full meal - appetizers, dinner (with sides), and dessert. Nope. Not even close. I will admit that ordering the sides was a bit excessive on my part - the meals were filling enough without them! At the same time, if you've got a large group of friends coming along, don't be afraid to give them a try, plus they're easy to share! So with all engines go, I laid down the most over-the-top menu order ever, Steak Tartare, Beef and Barley Soup to begin; Mushroom Wellington, Double Pork Chop, Suft & Turf entrees; Onion Rings, Potatoes au Gratin sides; AND (yes, there's more!) S'mores Cheesecake and Carrot Cake for dessert! Whew, that was a mouthful! (there I go again with my puns! And that one wasn't half bad)! 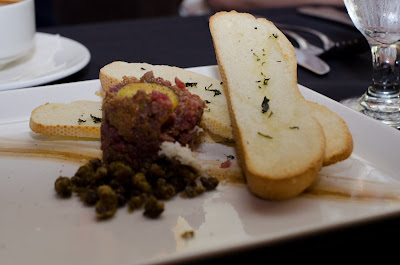 Steak Tartare Impressions: Nice Presentation! (this will be a recurring motif with all the dishes at Lux - they're all perfectly aesthetic!) Forming the backbone of the dish, the pickling on the tartare was excellent and the meat was bursting with flavour. Love the egg yolk on top! Not only does it give a nice contrast to the dish, it goes excellently with the steak! Crispy crusted soft bread rounds out the dish as one of the best steak tartares in Edmonton!

Conversely the Beef & Barley soup was just an average choice. There was far too much pepper in the soup masking any beef or barley...ness that would/could have been present. Especially considering one of my friends had a cold and was looking for soup in particular, the Beef & Barley was disappointing and she couldn't even finish the bowl! In the end, it was basically a stock tomato based soup with little more to offer. Could have opened a Campbell's and I wouldn't have noticed. 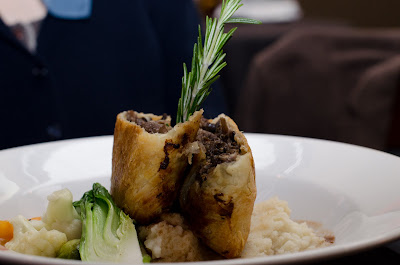 Mushroom Wellington: "Where's the Beef?" - flaky pastry, harvest mushrooms, portabello au jus, garlic mashed. Sounds and looks amazing! Unfortunately, the taste was rather mediocre like the soup and left me wanting more? The overall dish was far too salty and while you expect high sodium intake in a North American diet, this is getting ridiculous and hides the inherent flavour of the ingredients! 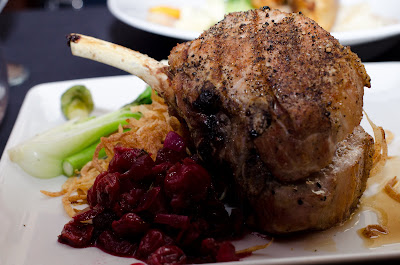 Fortunately for these times, there is always a saving grace. As beautiful as the steak tartare and as tasty, I present you the Double Pork Chop - sour cherry glaze, apple chutney, the other star of the night! Wow! In general, and it saddens me to say it, pork chops have a bad name in Western restaurants. They're often stereotyped as overdone and dry from years of must-be-well-done brainwashing (and unfortunately, that's often true!) but at Lux, I couldn't have asked for a better pork chop! Honestly speaking, this and Red Ox Inn have renewed my faith in eating out pork chops! Large and juicy, this pork chop was done to a medium well (thank god for Alberta Pork Producers! http://www.putporkonyourfork.com/all_about_pork/cooking_pork/temperature.html) though they will cook it down to a medium rare for you! (or at least, that's the lowest I would go!) This meaty beast will make a man of you (!) and the interplay between the sharp acidity of the sour cherry glaze and the pork was phenomenal! 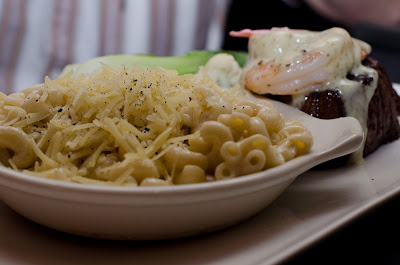 The Surf & Turf - 6oz tenderloin, jumbo prawns, truffled lobster mac n' cheese, béarnaise sauce - up next! As for the prawns and steak (the "money"), unfortunately, it was drenched with bearnaise! Maybe this is just me but do you ever think that there's just a bit too much sauce sometimes at restaurants? It does come down to personal preference but with the bearnaise being just average, I would definitely have preferred it on the side as opposed to having my prawns and tenderloin swimming in it! Either way, both the prawns and steak were juicy and tender; I was just put off a little..a lot by the sauce. The truffled mac n' cheese was good though, nothing special but satisfying like comfort food! 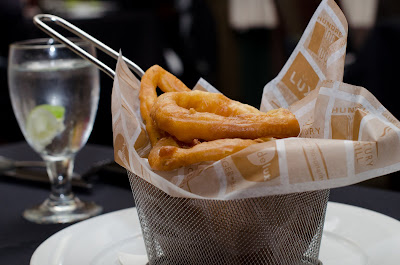 In terms of the sides, the clear winner were the onion rings. Whereas the potatoes au gratin were salty and lackluster, the Stella Artois battered onion rings were simply delectable! Not your run-of-the-mill crispy onion rings that you would expect, the onion rings were soft and chewy, like a dough-y batter.. (think waffle?). As I ate more, they seemed to become better and better with every bite and definitely grew on me over the course of the meal! The ranch sauce was on the side and wholly unnecessary, I found, for the dish. Yum!

Closing off a good (filling!) night, we got the s'mores cheesecake and carrot cake (recommended on Urbanspoon actually!). As for the cheesecake, it was really dense. Normally, cheesecake is already a heavy dish but this one stopped me in my tracks! Very chocolate-y but too rich! The carrot cake was decent. A lot of cream cheese on top (perhaps too much) but a sweet toffee and ginger ice cream made for a decent overall combination and a tasty dessert.
All in all, if you come to Lux, get the steak tartare and double pork chop (medium well). If you have room, maybe an extra side of onion rings but you won't be disappointed. As for the rest, a lot of average or slightly above average plates litter the menu but if you're paying this price, might as well make it worth your money (and time)!
The Verdict!: 78/100